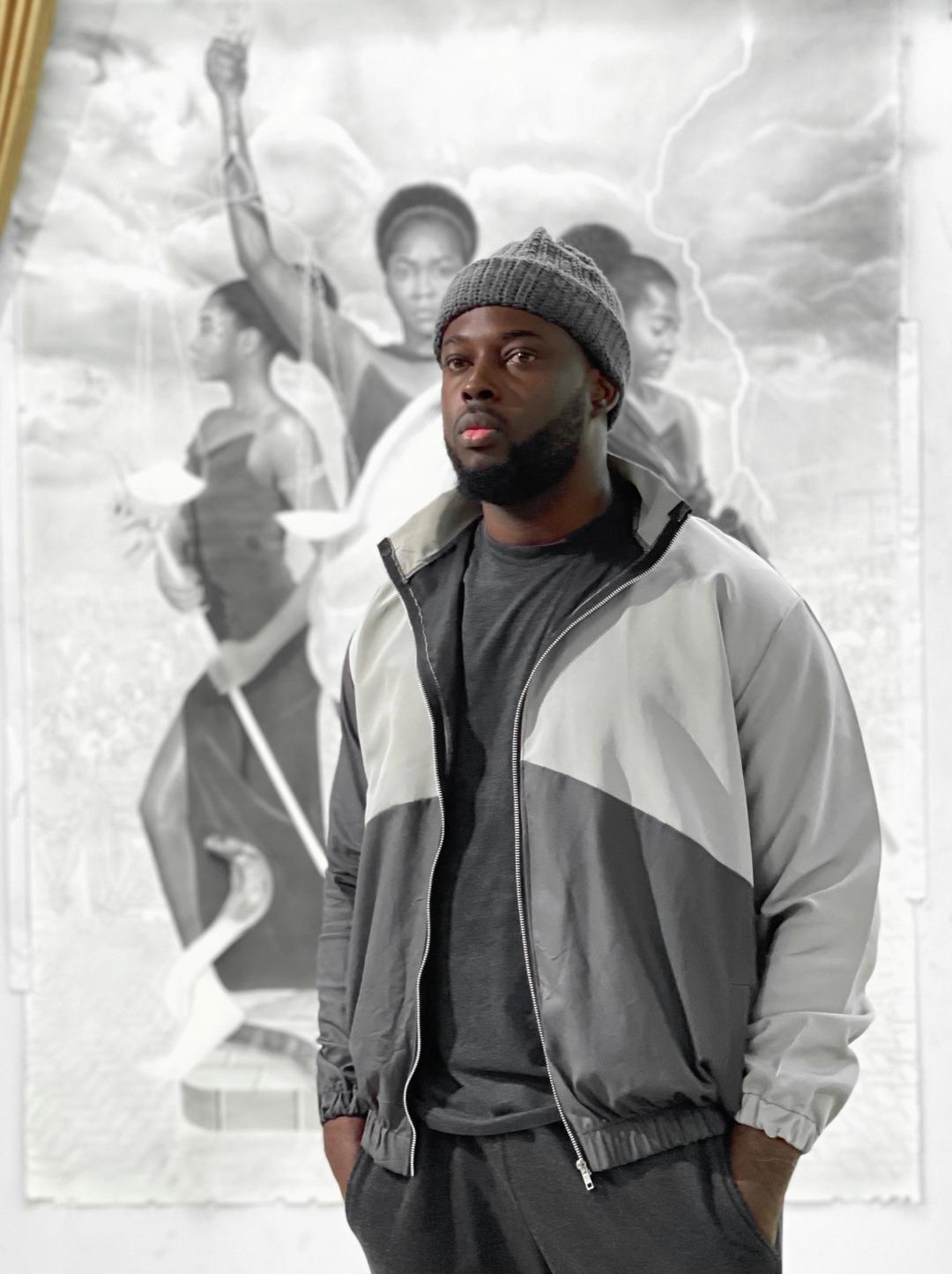 In a forthcoming exhibition in the US, Lagos-based artist Arinze Stanley Egbengwu gives the thumbs-up to the Nigerian youth for their resourcefulness in a country impoverished by greed and ineptitude. Okechukwu Uwaezuoke reports

A trio of practically identical black-clad female figures, shrouded in an aura of unapproachability, stands on a low pedestal in the foreground, in front of a hardly perceptible, densely packed mob of demonstrators. Above them, a lightning-stricken sky broods, ominously hinting at an impending Apocalyptic scenario.

Even at first glance, it is evident that these black amazons with Sphinxlike countenances are the artist’s metaphors for the three branches of government: legislative, judicial, and executive.

Talking about metaphors, the graphite pencil work by Arinze Stanley Egbengwu, titled “Communion,” swarms with them. In the work, such familiar objects as the scales, blindfold, toga, double-edged sword, cobra, bricks, garri, (a local meal made from ground and fried cassava roots) and assault rifle assume hidden—and sometimes familiar—meanings. For instance, while the symbols often associated with Lady Justice essentially retain their meaning, the artist associates other symbols like the cobra with “the venomous elements of backwardness”, the human skull with not only with death but also with “the impact of religious bias and sentiments on the legislative arm” and the assault rifle with power.

Thus, the Imo State University graduate expresses the Nigerian youth’s perplexity in the face of the glaring ineptitude and corruption among government officials. Of course, there is also the not-so-veiled allusion to the anti-police brutality protests – tagged EndSARS – which paralysed socio-economic activities all over Nigeria for weeks.

Indeed, isn’t this what the solo exhibition, titled De-Construct, which features nine large-sized portraits, seems to be all about? For the 29-year-old artist, lionising the highly-misunderstood Nigerian youths, to whom he credits a “resilient spirit”, is an attempt to reconstruct their much-maligned image. And, perhaps, in the process, he will be able to disentangle their image from the web of misconceptions and stereotypes that cling tenaciously to them.

Back to the three vixens in the work, “Communion”. On the left-hand side, facing the drawing is the depiction of the legislative arm in the garb of a chief priestess, who wields a mace (or, perhaps, the staff of Moses) as a testimonial of leadership. But then, this mace is attached to a skull, which represents the deaths caused by lousy legislature and leadership. She is also holding the snake of a cobra, whose body is wound around the feet of her companions.

Next to her stands the barely identifiable Lady of Justice as the representation of the judiciary arm. What was supposed to have been her blindfold now hangs loosely beneath her jaw, proclaiming her compromised credentials. Grains of “garri” fill one of her justice scales while the other, filled with water, tilts the balance to one side. This is a nod to the popular Nigerian street slang phrase “Water don pass garri,” which alludes to imbalance. Meanwhile, her rumpled toga, proclaiming her insouciance, clings to her well-built frame as if she had been involved in a scuffle. Her downward-pointing sword seems to pierce through a sheaf of paper, labelled MCMXCIX (or 1999) in roman numerals, which to an informed viewer is a veiled reference to Nigeria’s Constitution of that year.

On the right, the third lady, as the executive arm, wields an intimidating assault rifle, allegedly homemade, that denotes unbridled power.

Curiously, despite the menacing, combative demeanour of these three, they seem to be apathetic about the potential threat of the snake (corruption) curled around their ankles and hindering their possible forward movement.

Moving on to “Fruits of Labour,” another work in this exhibition, it depicts a white-clad priestly-looking woman sitting on a brick box filled with fruits—seemingly floating above a body of still water—in a futile attempt to achieve an impossible task: crack palm kernel shells with a foam. Two additional hands (with the fingers spread menacingly) seem to project from both sides of her head.

While the work symbolises the futility of trying to survive in Nigeria, it also gives a tacit thumbs-up sign to the Nigerian youth for their resourcefulness, even in an impoverished country that has been blessed by nature with under-utilised natural resources.

Arinze Stanley’s hyper-realistic charcoal and pencil depictions of black figures evoke solemnity and poignancy while roiling with complex emotions that are frequently connected to the experience of modern-day black people. Although he started drawing when he was six years old, using graphite pencils and materials from his family’s paper business, it took a firsthand encounter with police violence for him to decide to use art as a form of activism. Then, there was the widely-reported Lekki shootings—also called a “massacre” depending on who is telling the story—which left him with a feeling of helplessness. Thus, the commitment to social justice and political activism became the theme song of his studio practice.

Besides, the fact of living in Nigeria, especially in a Mammon-driven city like Lagos, ensures that these issues remain on the front burner. Inevitably, these frustrations find themselves expressed as a kaleidoscope of emotions on the faces of his subjects.

Self-taught and guided by the three principles, which he refers to as the three P’s: patience, practice, and persistence, he has developed his photorealistic technique over the years.

Essentially, he incorporates his own ideas into his compositions while working with live models and reference photographs. This is despite the fact that he can take anywhere from two to four months to complete a single portrait.

As a result, these visual arts equivalents of an ode to Nigeria’s resilient young were created for the exhibition De-Construct, which will be held at the Corridor Contemporary gallery in Philadelphia, Pennsylvania, US.